It is difficult to explain good fortune.

Of course, I could tell you all that and I would be lying, because it only took a couple of could-have-beens for me very early on in my career as an adjuster to decide that for some things, a zoom lens gets me close enough. So, no, the roof didn’t collapse on me. The roof didn’t even collapse. (Though it could have.)

If it had collapsed, we’d be talking about that fortuitous phone call: who it was from, why I broke my own rule about taking calls while on inspection, how it came to be that the person called at just that moment. We’d be talking about what would have happened if the call hadn’t come, if I’d have hit Ignore, if the homeowner had been standing in there with me at the same time.

It’s difficult to explain good fortune, though that didn’t stop Wisława Szymborska from trying in her poem “Could Have.”

It could have happened.
It had to happen.
It happened earlier. Later.
Nearer. Farther off.
It happened, but not to you.

(Read the rest of the poem here.)

Szymborska has a way with repetition. Her use of cataloguing and contrasting images allows her to articulate the absurdity (just then a straw went floating by) of trying to give a reasonable explanation for something that is not readily explainable, without having to say straight out that there’s no reasonable explanation.

She sets it up in the first stanza with a clipped pace, and by the time I read the first two lines of the second stanza—You were saved because you were the first. / You were saved because you were the last—she has me. I can try to explain how I was saved from some impending disaster, but in the very next instance, it’ll be the opposite, and won’t I look ridiculous then: Because it was raining, because of the shade, there was a forest, there were no trees.

By the end, I can’t tell if she was literally moved by a dramatic escape or taking a playful jab at the one who’s made it through one more close shave, slipped through the one hole in the net. I’d like to think she could have gone either way.

And I think these are things we can’t know, yielding my own response to the poem:

After Wisława Szymborska: What You Couldn’t Have Known

If you’d made the flight,
you’d have argued
with the flight attendant
for two whole minutes
before she sighed
and trucked
your oversized bag
back to the front
past dead-
tired passengers
with carry-ons stowed
securely in the overhead bins.

Two minutes is short
beside a six-hour flight—
just enough time
so the bird
that flew
into
the engine
could have
been long gone.

This is a modified reprint of an article that first appeared at Tweetspeak Poetry with the title “National Poetry Month Poetry Dare: Wisława Szymborska’s ‘Could Have'” and is reprinted with permission. Photo by Massmo Relsig, sourced via Flickr under a Creative Commons license. 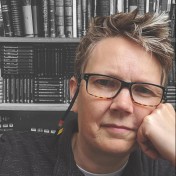 I’m a claims adjuster, helping people and insurance companies make sense of loss. Sometimes, when I’m not scaling small buildings or crunching numbers with my bare hands, I read Keats upside down. I'm Senior Editor and Director of Many Things at Tweetspeak Poetry and I design author and business websites at The Willingham Enterprise. You can find me on Twitter at @lwlindquist.